I like reading the Bible every morning from 5.00am. Today’s scripture moved me to write this article. It is found in the book of Samuel 25. In this book, a story of Abigail is told. Abigail is described as beautiful. Unlike most other women in the Old Testament, Abigail is also described as “intelligent” or “clever”, or “of good understanding”. Beautiful and clever Abigail was married to a wealthy man, and she may have enjoyed the benefits of an affluent lifestyle, but her rich husband Nabal was foolish, intemperate, and mean. Abigail was the able mistress of an extensive household. A servant told her how Nabal has insulted and dishonoured David, and he informed her of the danger they now faced. Her servants, both male and female, promptly helped Abigail in her decisive plan to placate David. It would have been no mean feat to confront David and four hundred of his men who had been dishonoured and were intent on revenge with their swords at the ready. Yet Abigail approached David and, with great diplomacy, humbly offered him a “peace offering”. She gave David and his men plenty of food. Her quick actions saved her household from disaster and kept David and his men from unnecessary bloodshed. Abigail was also brave considering that her actions would be found out by her husband, and then she would have to face his violent temper. The next day, Abigail told Nabal everything that she had done. Thankfully, God spared her from Nabal’s wrath. Nabal immediately has some kind of heart attack and died ten days later from heart failure. David did remember Abigail. After Nabal’s death, he seems to have lost no time in asking her to become his wife. It is not clear whether David sought this marriage because of his attraction to Abigail or if it was for political reasons, but he certainly admired her. Abigail became David’s third wife and she bore David’s second son Chileab (2 Sam. 3:3). (Her son is called Daniel in 1 Chronicles 3:1.)[7] Chaduchinews assert the present day story of Rachael Musyoki-CEC Education, Kilifi County Government. The story is different in context though relevant to premise the above propositions. Rachael Musyoki, the current County Executive Committee (CEC) Member of   Education, a wife and mother of two, fourth born of a humble Christian family of six that was brought up in Marikani, Kilifi County.

Rachael Musyoki in her Office

In 2013 Rachael joined the County Government of Kilifi. Where the governor of Kilifi county H.E Amason Kingi appointed her as an Executive in his office and Public Service management where she was until 2015. In June, 2015 the Governor reshuffled his cabinet and Rachael was appointed as the County Executive Committee Member of Health Service. Where she oversaw a team of 1400 employees, 600 casuals and 142 health facilities. While at the health department she managed to see the completion of and opening of 20 new health facilities amongst other health projects and programmes.

As the CEC of Devolution, Public Service and Disaster management she initiated successful programs in the County. Among the programs she initiated there is the ‘Pesa kwa Wazee’ initiative which has seen the elderly in the community get assistance from the county. She initiated the ‘performance and employee evaluation metrics as well as ‘team lead rapid results (RRI)’ that synchronized employee output for the whole county 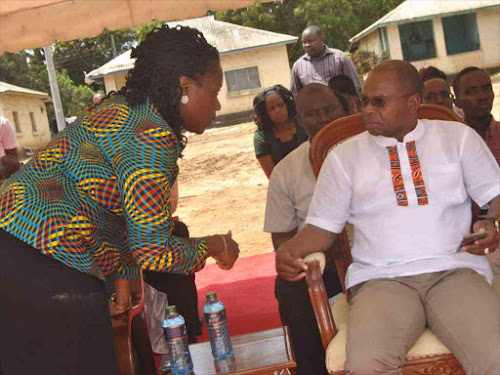 Rachael Musyoki in consultations with Governor Kingi during a County Function.

At the education department, she has committed to see all pending projects completed before the end of this financial year. In all the departments she has served, Rachael has pushed a pro-devolution narrative that seeks to build a strong relationship between the people of Kilifi and their County Government. Effective service delivery is what Rachael believes in and and her hard-work tendencies are prompted by this inner belief. Friendly, unique, kind, committed and hardworking are just a few words to describe Rachael. Even in the face of challenges in Kilifi County Bureaucracy, Rachael keeps pushing forward with insurmountable determination to succeed. She is a true inspiration to many young ladies not only in Kilifi but Kenya at large.

You may have missed

A HERO IN GIVING: Mombasa Billionaire whose Generous Hand is touching the needy!